Tis the Season For Sickness – And Servers Play a Key Role 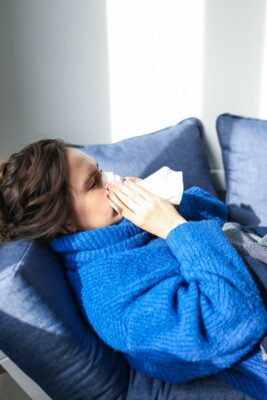 According to the Centers for Disease Control, food service places a key role in preventing norovirus outbreaks. Norovirus – what we often call the “stomach flu” – is every bit as contagious as influenza (which can also be spread through food service). A few keys facts about norovirus –

Symptoms of norovirus typically include vomiting and diarrhea, so it’s not an illness someone would fail to realize they have. Servers with symptoms should absolutely stay home from work to contain the illness. That’s easier said than done though, since very few servers get paid sick leave. In fact, 1 in 5 food service workers reports going to work while suffering from vomiting or diarrhea.

Not surprisingly, the CDC recommends that employers consider paid sick leave to foster an environment that encourages public health. In the meantime, managers can respond with support when employees call in sick. In addition to not berating servers who aren’t coming in for illness reasons, managers can work to ensure that those servers are still able to get finish their scheduled hours once they are well.

The norovirus incubation period can be anywhere from 12 to 48 hours. That means for 12 to 48 hours, a food server could be infected and not know it. This is where proper hand washing and food handling moves to the front lines. It turns out 54% of norovirus outbreaks caused by food service workers are linked to workers touching ready-to-eat foods with bare hands. In general, food service workers display proper hand washing only 1 in 4 times they are observed.

The CDC specifically notes the importance of certifying servers in food safety practices. Yet another benefit of your Texas Food Handler certificate.